Industry Report: How the Rental Market Bounced Back from the Shock 3% Buy-to-Let Stamp Duty

It’s four years since an extra 3% stamp duty was imposed on buy-to-let properties. While many experts predicted higher rents and unhappy tenants as small investors quit the market, Property Investor Market’s research shows the opposite has happened. Ross Kelly reveals 84,000 new landlords have entered the investment market, and there has been a 22% increase in the number of rental properties.

In November 2015 the then Chancellor, George Osbourne, unveiled his controversial 3% stamp duty land tax surcharge on buy-to-lets and holiday homes of over £40,000.

Aspiring investors planning to get a first foot on the property investment ladder were left reeling as the Chancellor declared: ‘..more and more homes are being bought as buy-to-lets…Frankly, people buying a home to let should not be squeezing out families who can’t afford a home to buy. So I am introducing new rates of Stamp Duty that will be 3 per cent higher on the purchase of additional properties like buy-to-lets and second homes.’

It was a move aimed at increasing the number of homes available to buy; but which could have severely harmed the property rental market which is so vital to younger workers and students.  The new duty could well have created a dramatic reduction in the number of new buy-to-lets being made available to renters. But, four years on from the introduction of this controversial new tax, Property Investor Market’s research shows investors with enough funds to cover the additional duty continued to enter the market, and that it has seemingly increased professionalism in the sector. 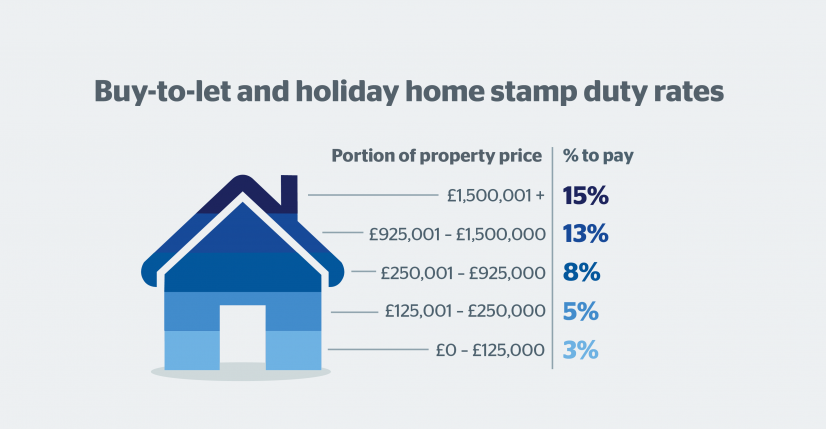 But far from discouraging future investors, our research reveals the new duty seemed to have focus the property investment market. Prior to the new stamp duty there were certainly a number of would-be-landlords who stretched all their funds to buy a second or even third property. Working on such tight margins there was often little left in the kitty to cope with sudden emergencies at these properties – or even regular maintenance. The imposition of the new duty cleared out a swathe of would-be landlords operating on a shoestring at the margins of the sector. That in turn means increasing satisfaction from tenants and an  increase in professionalism across the sector.

Government figures from 2015 revealed just 65% of private renters were satisfied with their current accommodation. That’s a reflection of how thinly stretched some landlords were as they sought to take advantage of the market. In contrast the latest Government figures reveal 84% of private renters are satisfied or very satisfied with their rental property. That shows that one – albeit unintentional– result of the new tax, has been to weed out potential investors who were perhaps spreading their money too thin, and consequentially unable to properly maintain properties. The new tax has, it seems, winnowed out a number of fly-by-night landlords, whose main aim was a very quick turnaround on a relatively small capital spend.

But it’s not only tenants that seem to have benefitted against the odds from George Osbourne’s stamp duty bombshell. Investors themselves have overcome the new tax burden and, indeed, the rental market has boomed since the imposition of the new tax. In 2015 before the new tax hit, 4.3 million properties were rented privately, according to the English Housing Survey. The natural assumption is that the number of rental homes would cease to rise with the introduction of such a steep tax on potential rental properties. But, in fact, the latest Government figures reveal there are now 5.45 million homes that are buy to lets or shared houses: a 22.4% increase in the amount of rental stock.

And that new duty didn’t deter new investors from entering the market for the first time. HMRC figures for 2014 revealed there were 1.75 million landlords in the UK in the year before the new tax was unleashed. Today the latest Government data reveals there are 2.59 million; a 38% increase. These are likely serious investors, undeterred by the new 3% duty and happy to play a longer game, in order to potentially reap the benefits of the property market over time. That makes for sensible investment and better landlords.

And with a 29% increase in tenant satisfaction, it seems the new tax did the rental sector a favour in weeding out half-hearted or financially over-burdened or overambitious would-be landlords and increasing the level of professionalism in the sector.

Should You Invest in a Single or Multi-Family Rental Property?

What Common Problems Do Landlords Face?

Which Services Are Worthwhile When Selling Your Property?

Selling a property can be a long-winded and stressful situation, not least because it’s not one...

It's more important than ever to make your home more efficient. Energy-saving and carbon reduction...

How to Invest in a Fixer-Upper House: What to Keep in Mind

Are you thinking of investing in a fixer-upper house? If so, there are a few things you should keep...